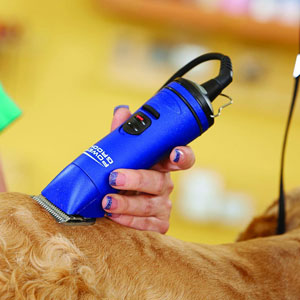 A strong, simple dog clipper like the Andis AGRV PowerGroom+ Clipper is a must have for any dog owner. Also, this is one of the top brands on the market, so there is instant appeal.

This is a five-speed model, from 2500-5000 spm and this is said to help to reduce the heat of the blades and improve control.

The device comes with a #10 UltraEdge Blade, which isn’t uncommon with pet clippers, but it is also compatible with CeramicEdge and ShowEdge blades.

There are three clear sales promises with this clipper – powerful, cool and quiet running. Are they all true, or does this device let users down in any way?

What advantages have been highlighted by buyers in their online reviews for this Andis PowerGroom+ Pet Clipper?

Buyers reports suggest that the model ticks two out of three boxes here. First of all, it is powerful with some great results on a range of problem breeds and difficult matts in coats.

There is the promise in the description that these are “super duty” clippers, which should in theory make them reliable enough for any job on any breed of dog. So far, reports suggest that this is true with no clear breed types that cannot be handled.

The compatibility with the ShowBlade should allow for a cleaner, more precise cut too. Secondly, it is fairly quiet. There are good comments on the lack of noise from different users. Many say that it is only mildly noisy on the highest setting. There are a few issues with scared dogs, but they tend to be nervous animals anyway. 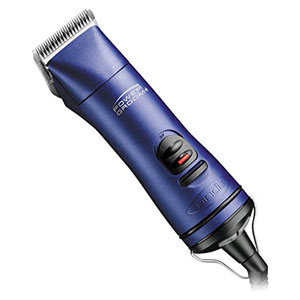 In addition to this, there are plenty of comments about the system being easy to use. There are positive reviews from both groomers and more general users, which shows that the controls and shape are pretty good.

There is a 360 degree swivel cord for ease of use, as well as the barrel grip, and both seem to be appreciated by users.

In addition to this, the device is said to be built to last with the break resistant housing. Users that have dropped them have had no problems with cracks or damage, which is ideal if handling boisterous, larger animals.

This must mean that there are heat issues, but are there any other potential problems with the Andis AGRV PowerGroom+ Clipper?

The first issue here is with the heat generated. There are many people offering good reviews that say they would love these clippers if they didn’t heat up so quickly. Some have had to turn the Andis dog clippers off and wait for them to cool, which is problem when there is fidgety dog on the table that can’t wait for it to the over.

Others say that they can reduce the heat with blade oil, but still say that it is an issue that should be seen. This could be partly due to the blade used, especially if newcomers are sticking with that initial #10 blade.

As was mentioned above, the product also come with a CeramicEdge blade. This option should cut down on the heat generated, which again shows that this basic blade should be swapped out for better options. 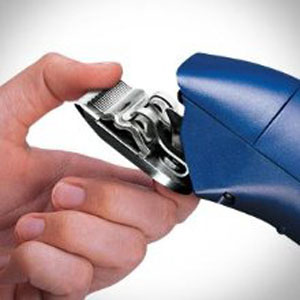 There is also the potential problem here that the AGR+ battery pack is sold separately. This means that while there is the option to remove the cord for greater freedom of movement, it might be costly.

Other problems are more minimal. Some feel that the on/off switch is in the wrong place and trigger it by accident.

Some people are deducting a star because they are waiting to see how it works on other animals. Then there are some very low rated reviews based on faulty items, but the majority seem to be happy.

Summary: what does this all mean for the final verdict on this Andis AGRV SuperDuty PowerGroom+ Pet Clipper?

There are some clear issues for some buyers that stick with the basic blade and high speeds and struggle with the heat. However, the design, speed options and blade compatibility can help here.

These simple fixes, the overall user-friendly design and the quality of the cuts all mean that it is hard not to recommend this Andis dog grooming clipper for groomers and dog owners alike. A battery pack would be nice, but the device is still powerful, reliable, quiet and easy to use.